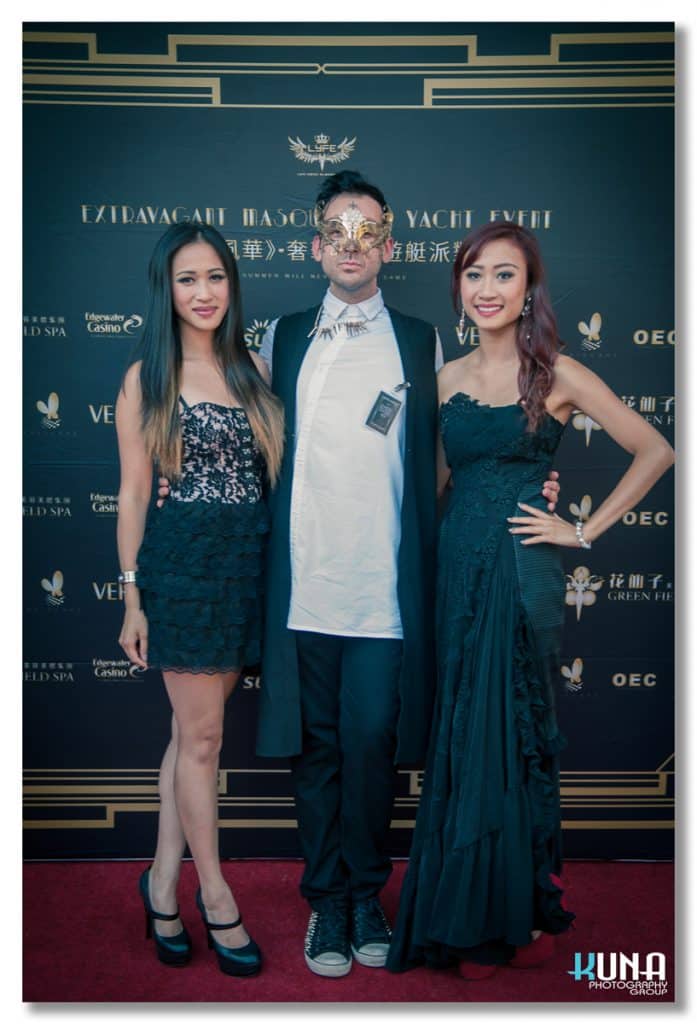 LYFE Vancouver brought Glamour back to the city (and the Ocean) and literally gave me LYFE with their roaring 20’s inspired Fashion Masquerade Party! LYFE means “Live Young Forever” – with their definitive taste & efficiency in event planning I knew we were in store for a night to remember. For this event I was styled by my new Stylist the talented Raul Manriquez of Raul YYC Fashion Styling, who is also coming up with 2 more looks for me this summer when we cover The Deighton Cup 2015 next week, and Diner En Blanc Vancouver in late August. Kuna & I headed down to the docks at the Plaza of Nations, where we first enjoyed a Luxury Car Show before hitting up the Red Carpet: 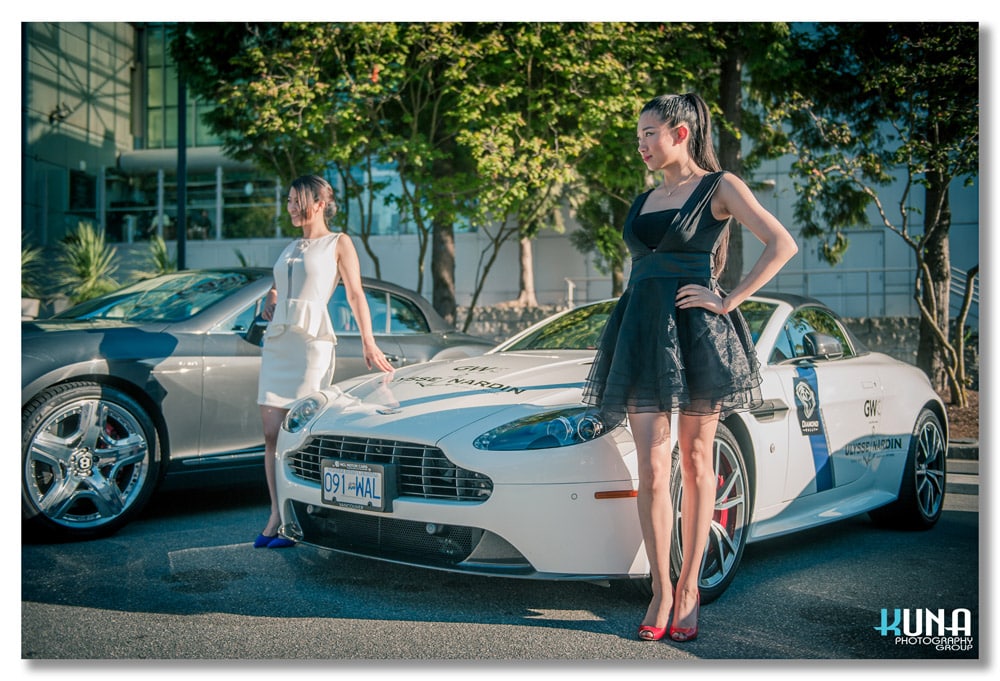 The VIP guests then walked down the Red Carpet holding beautifully crafted Invitations before boarding the beautiful 3 floor mega-yacht “The Magic Spirit” which holds capacity at 400 people. Cathy Lai knocked this event out of the park! She, at 23 is the owner of LYFE Vancouver, Lux. J, & Live Young Forever Holding Group Ltd. With elite sponsors such as Versace & Aston Martin backing Cathy, I’d say this talented young Mogul has only begun to blow us away by giving us a juicy taste with this event of what’s to come. I know she will continue to succeed Worldwide.

Cathy Love making her dress come to life, a vision in her Facebook Profile photo.

On to the fun times! I had a blast. As we boarded the “Magic Spirit”, I spotted these killer shoes worn by a VIP guest ahead of me in line. Kuna & I had to street-style snap this gentleman as I enjoyed his shades, the pearl embellishments on his white dress shirt & those zippered pants paired with these beauties. 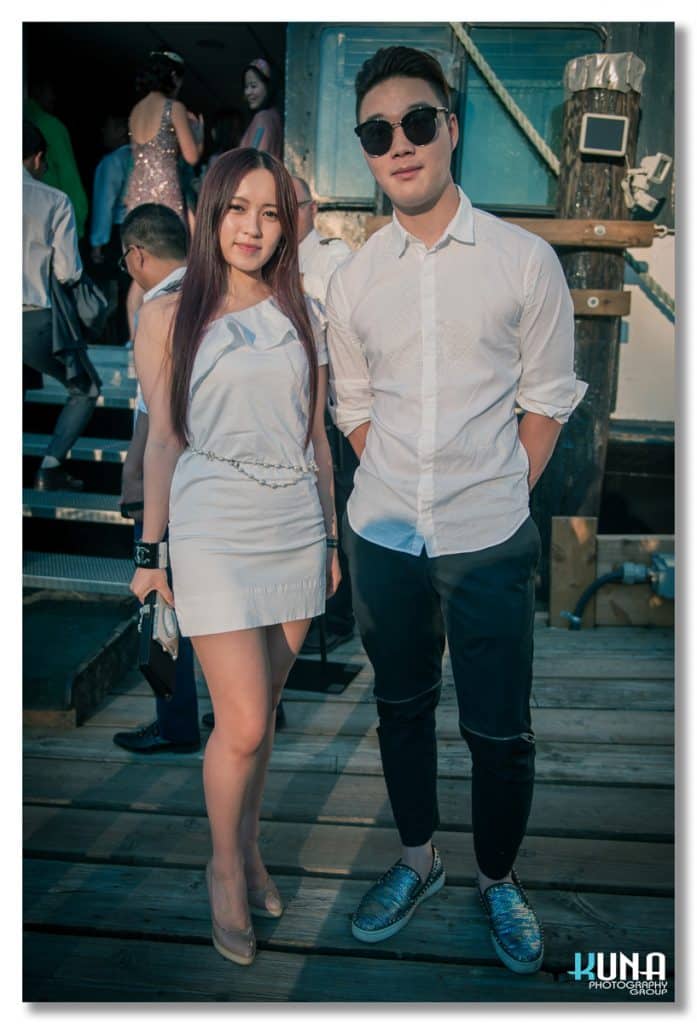 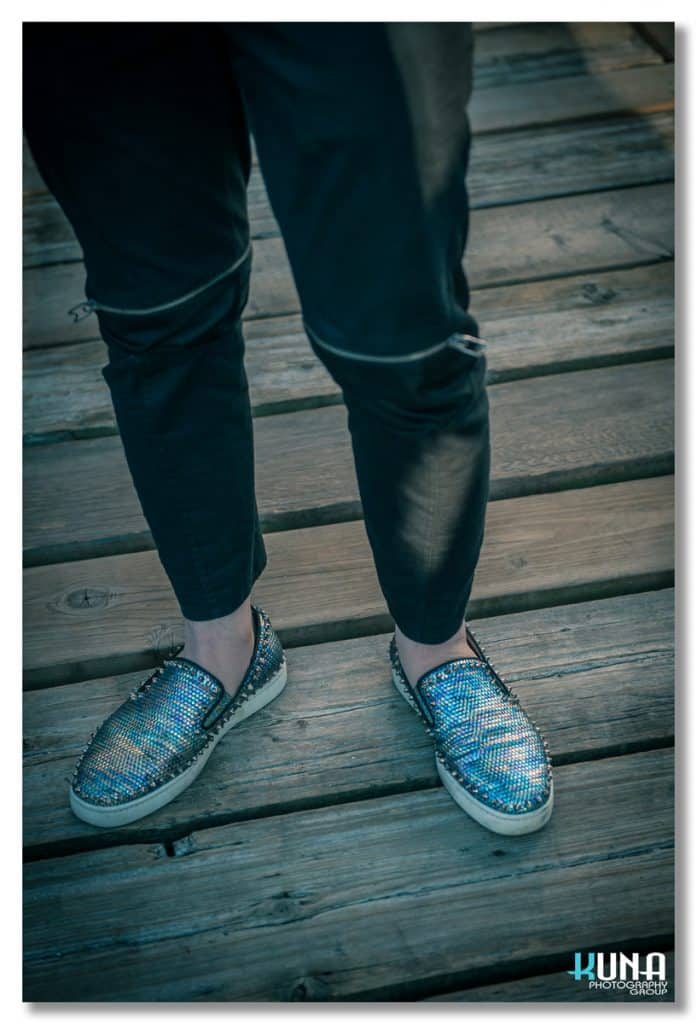 Those shoes though. Want!

“Mama” Keiko Boxall looking fabulous as always, still scouting young talent as a Runway Coach and Agent in Vancouver – she met me when I was 21 & I was doing my first shoots and runway shows as a model and has served as a role model, mentor and Matriarchal figure in our Fashion Industry for decades! Slay, Keiko, Slay!

I made fast friends with a talented Fashion Designer named Angela Huang – who left me gagged as all I could say in first introductory words to her, was “Beautiful!” to which she replied “You Too”. The rest was history! Her 1920’s inspired red dress was designed by Angela herself (Angel Huang Design) & she killed it! GIRL.

It was my intention with this event to cover the fashion that I felt brought the essence of the 1920’s all the way into 2015 & Angela Huang definitely rocked that, especially in this impromptu shoot we had with Kuna Lu on the side deck of vessel, where I shouted ‘your man is lost at Sea!’ & she channeled the feeling instantly! Angela Huang is always on point, we talked about how with her Instagram feed she expresses herself, as an Artist – her Insta-feed has a gradient flow with an International Fashion Blogger feel. 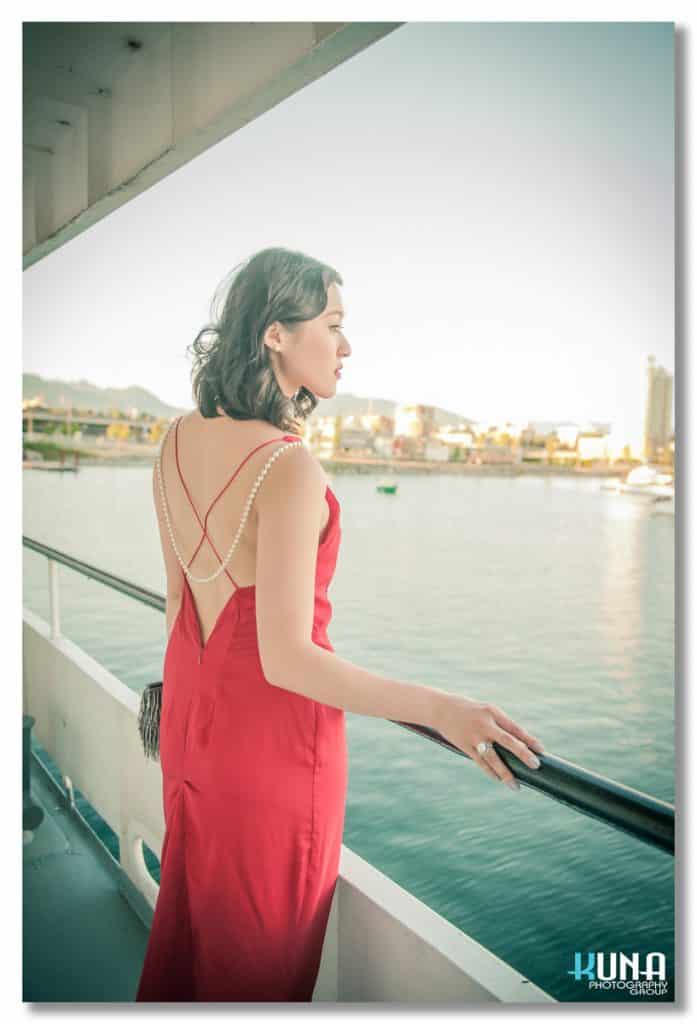 My homegirl Linda Dong cracks me up with her honest & hilarious social commentary in her comedy skits, which have made her a YouTube celebrity with millions of views. She is the Shit! Had so much fun with her and her sister Kelly Dong who is equally as talented (and beautiful!) who also stars in many of Linda’s videos which have risen to viral internet fame with her satire of different Stereotypes. 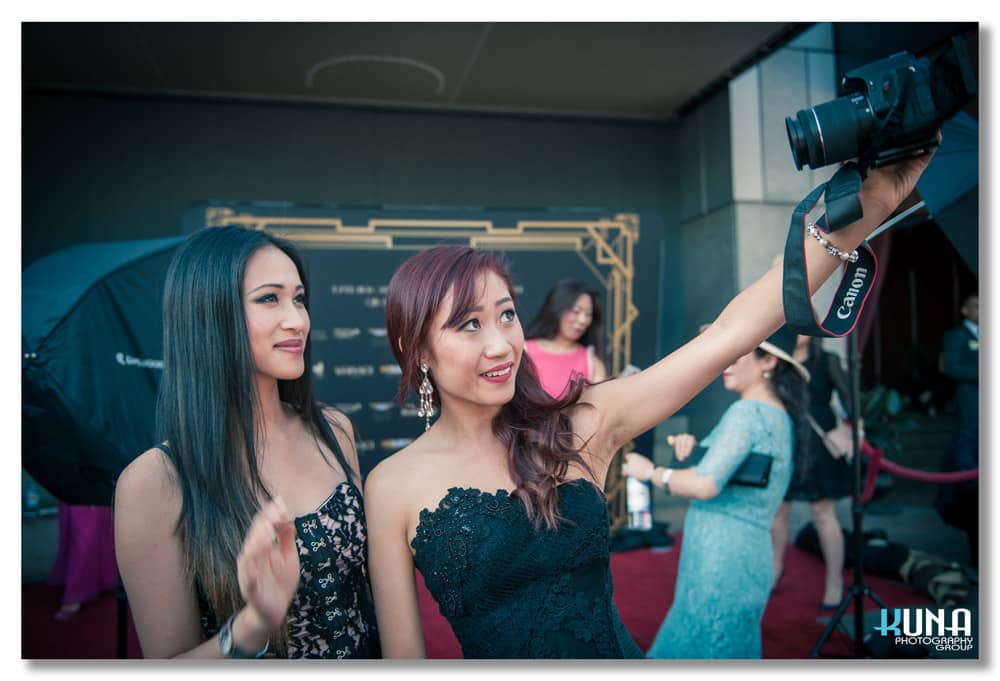 International Superstar DJ Pac Man flew in from Hong Kong just to play at this event & ripped things up on the decks all night while we got Turnt on the top deck LED dance floor PS -I love Pac-Man’s line of custom made luxe Watches, made with some of the same quality parts that Rolex uses to create their timepieces. Cathy brought something fresh to the city by incorporating her outside-the-box concepts and wild ideas which has “built the foundation of a truly unique Chinese Canadian social platform” as described in her bio on the LYFE Vancouver website! 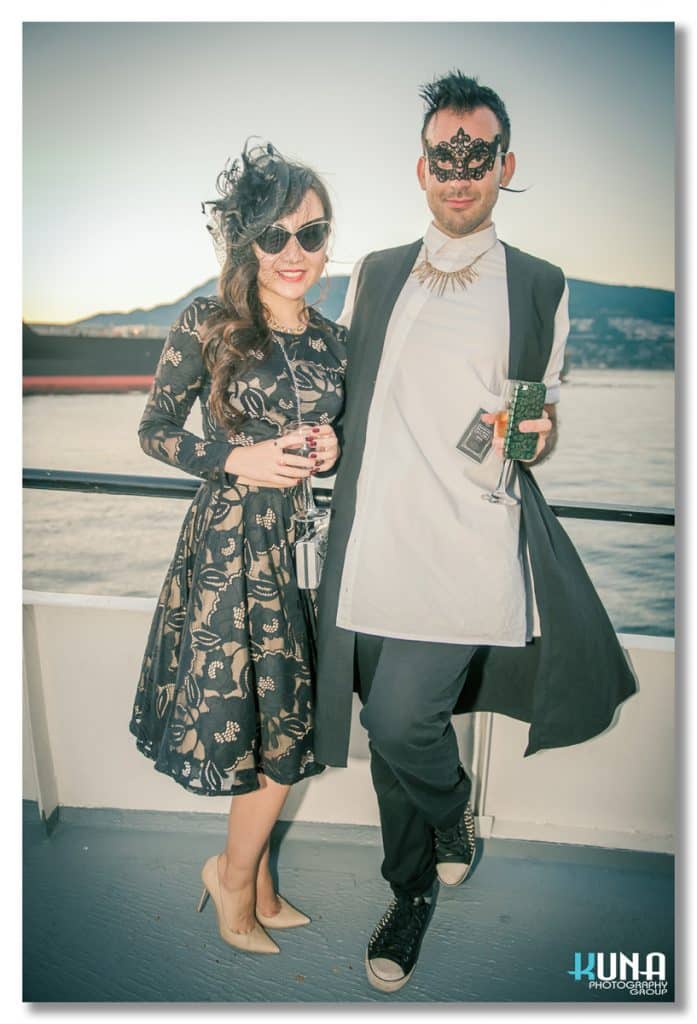 A VIP Media Gold wristband brought me up to the VIP Lounge where I enjoyed champagne, had a bottle of white & red served with hospitality by Magic Spirit staff which was shared with some new talented friends as we shared life stories while connecting with each other collectively.

Beautiful Ice Sculpture aboard the Magic Spirit Yacht – yes I touched it, I couldn’t resist ?

Ice Sculptures with the LYFE Vancouver logo lined the Red Carpet aboard the top deck where two guards parted a gorgeous curtain which led us into VIP Lounge. Here, we enjoyed a large shell-shaped ice sculpture – elegantly cut which held a delicious spread of crab legs, raw oysters, fresh mussels & smoked salmon upon it catered by the Magic Spirit staff. Fabulous guests everywhere were clinking glasses, laughing and enjoying the stylish company surrounding them as we continued to experience the LYFE event & our voyage. 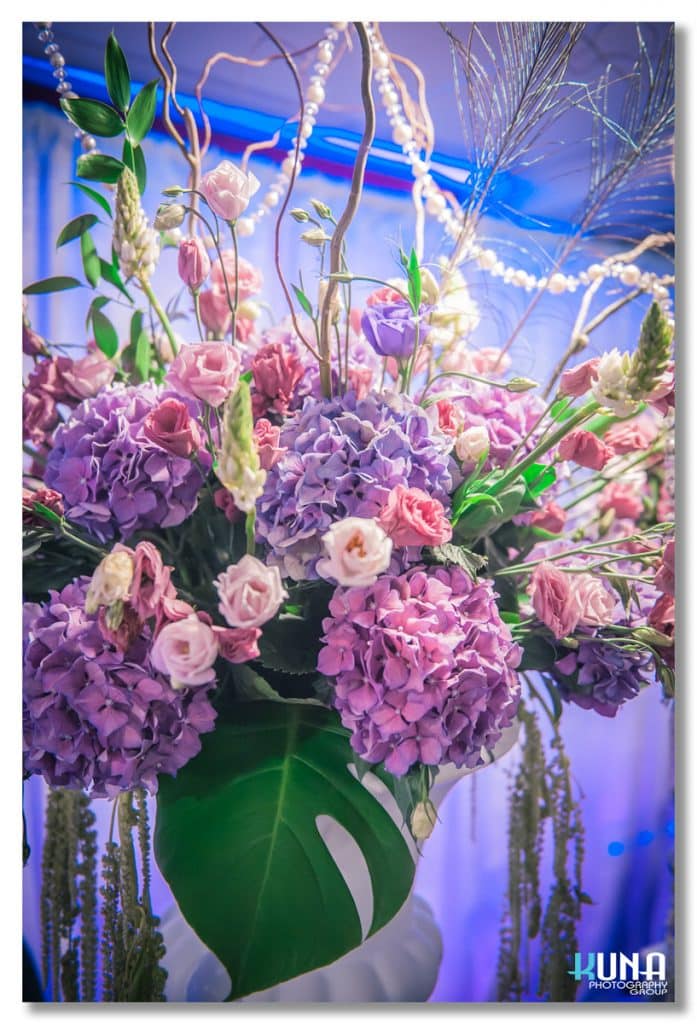 Floral centrepieces and displays by Elsie, The founder and head designer of Miss Qi Event Design who stayed up until 3am preparing the breathtaking Floral event design displays & shared with me (when we met) that she named her adorable son Justin because “anyone named Justin is good looking!” ? 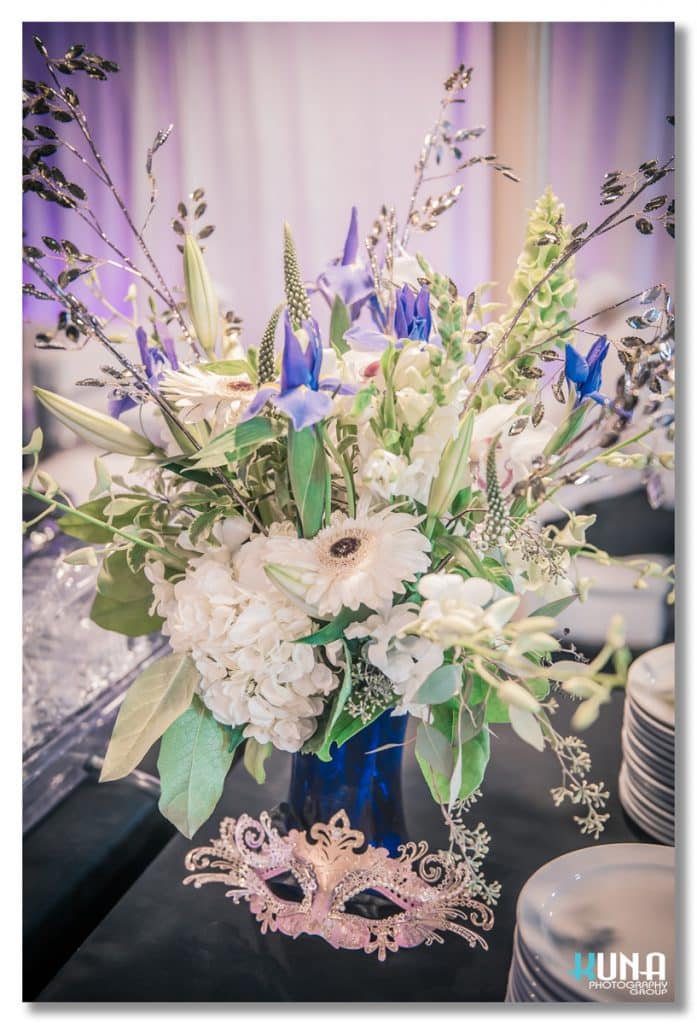 It was a pleasure to meet the owner of Blaq Sheep Coffee, Tan Tran – who definitely knows how to “Live Young Forever” (LYFE) & who’s lovely, beautiful wife is the sister of Hong Kong Actress and cantopop singer Cecelia Cheung, their brother is none other than DJ Pacman! We finished the beautiful voyage and evening on the waters of Vancouver by dancing on the LED Dancefloor on the top deck of the yacht after another fun synchronized dance performance by the energetic GSG Productions, Inc dance troupe.

The GSG Productions, Inc. dance troupe working up a storm on the LED Dance floor which glowed even brighter after a stunning sunset in Vancouver.

The After party was held at the Shangri-La XiShi lounge & you could see Limos departing immediately after we landed back ashore. Keep your eyes on the events that LYFE Vancouver crank out in the future. I, for one am thrilled to see what they have in store for us!

Thank you so much for having us – hats off to Cathy & her team! Writing by Justin Voitic Photography by Kuna Lu | Kuna Photography Group Justin Voitic’s Styling by Raul Manriquez Source: HUSH Magazine